Alaska’s Aleutian Archipelago is an island chain spanning over 1550 miles that reaches from mainland Alaska all the way across the Bering Sea to Kamchatka in Russia. The Aleutian Islands are brimming with volcanoes, both active and dormant, and form part of the Pacific’s Ring of Fire.

How Many Volcanoes Are In Alaska?

With over 130 volcanoes in Alaska, the state is a hot spot for volcanic research as well as activity. A majority of the volcanic eruptions in the U.S. over the last 200 years have been in Alaska and eruptions of ash have grounded flights and closed airports in recent years. In Alaska, active volcanoes are a very real threat and a part of the rugged landscape.

History Of Volcanoes Erupting In Alaska

Written volcano history in Alaska dates back to 1760 and since that time, there have been over 240 confirmed volcanic eruptions from 30 different volcanoes. Some of these volcanic events were more violent than others and a few notable eruptions in went down in the record books for the power of the event.

When the Novarupta and Katmai Volcanoes erupted in 1912, it was the largest eruption on record in Alaska and the Earth’s largest eruption of the 20th century. This epic event created the Valley of Ten Thousand Smokes, a place where curls of smoke rose from the ground for years after the eruption. Now part of Katmai National Park, this starkly beautiful area is safe to explore through hiking and backpacking.

In 1989-1990, Mount Redoubt near Anchorage erupted a series of times leading to school closures, building collapses from the weight of the ash, and a passenger jet losing power in all four engines, narrowly escaping catastrophe with the 231 souls aboard. Occasionally, ash still kicks up into the air from a stray wind and fills the sky with volcanic haze.

Mount Spurr, a volcano near Anchorage, was the site of the Crater Peak eruption of 1992 which spewed ash across the city. Airports were closed and air travel was disrupted by ash in the air as far as away as Cleveland, Ohio.

Alaska is no stranger to volcanic activity and the earthquakes and tsunamis that can result. Volcanoes in Alaska are located across the state from the Aleutian Arc to the Wrangell Mountains, and in ancient times in the interior and west to the Seward Peninsula. According to the Alaska Volcano Observatory, on average there are 1.7 volcanic eruptions a year. It’s part of what keeps Alaskans on their toes, ready for the natural world to throw a wrench in travel plans at any time.

If you are looking for Alaska volcano eruptions, this list of our top 11 volcanoes may offer you some insights on where to go to get a glimpse or an actual eruptions or steam event. Keep in mind that these eruption events come and go and can happen at any time.

This picturesque volcano is symmetrical and smooth, mirroring Mount Fuji in Japan. On Umimak Island, this is the tallest mountain peak in the Aleutian Arc rising over 9000 feet above sea level. The upper portion is covered year-round in glacial snow and ice, and thin stream of smoke rises from the crater almost constantly.

Located on Bogoslof Island, this stratovolcano is in the Bering Sea and most of the volcano lies submerged beneath the surface. Black sand, craggy volcanic rubble cover the surface of this new volcanic island, slowly but surely increasing in size over the centuries. In recent years, frequent eruptions have changed the island observably although the volcano seems to be quiet for now.

Image Above: View of northern end of Bogoslof Island in 2004. The 1992 Dome is on the upper right, and remains of the Kenyon Dome (created 1927) on the upper left.

Between Adak Island and Atka Island in the Aleutian chain, this small volcano covers just 60 square miles and rises 5710 feet above sea level. Visible from the Aleutian community Adak, this stratovolcano erupted sporadically over the last century with the most recent event in 2019.

A stratovolcano that rises over 800 feet above sea level, this active spot last erupted in 2016. Pavlof lies at the end of the Alaska Peninsula in the southwest and is frequently active and assessed at high risk to erupt again. The peak is also frequented by fearless mountain climbers who head straight to the top and ski back down to sea level.

Taking over the majority of the Gareloi Island, this 5000-foot tall stratovolcano features two peaks separated by a narrow saddle. A field at the top caldera contains active fumaroles, or streams of ash and gas that constantly emit from the volcano. Located far out in the Aleutian Arc, Gareloi’s last eruption was in 1996.

Located on Unalaska Island, this stratovolcano rises 5900-feet above sea level and the upper region is capped with ice. Within the caldera lies a bright blue lake that formed since the volcano was last active in 1995. Makushin shares the island with Sugarloaf Volcano and Tabletop Mountain, all originating from the same vent.

This central shield complex volcano lies in the Aleutian Arc on Unmak Island and rises 3500 feet. The broad area of volcanic activity covers a 5.8 mile circular area covered with vents, fumaroles and hot springs and much of the landscape features steaming crevasses. The most recent volcanic activity was in 2008 when ash flew from the caldera 50,000 feet into the air.

A conical stratovolcano that covers half of the small Chuginadak Island in the Aleutian Chain. Cleveland is the tallest member of the Four Mountains Group, a designation for the volcanoes in the area, and stands at 5700 feet. Snow covers the tops of the four mountains and although Cleveland is the highest peak, it melts before the others due to internal warmth from volcanic activity.

Unlike the island volcanoes, this stratovolcano lies in the center of the Alaska Peninsula. Rising to 8200 feet, Veniaminof is an active volcano that is on high alert for an eruption. In 1750 BCE, the caldera was formed in a massive eruption that rocked the area. Another one could occur at any time and the volcano has been on red alert since 2018.

An active stratovolcano just west of Cook Inlet, it stands over the surrounding terrain at over 10,000 feet. At the start of the Chigmit Mountain subrange, the imposing Redoubt can be seen from across the Cook Inlet. The volcano is frequently active with a serious eruption of ash in 1989 that grounded a jetliner. Written records back to the 1700’s note smoke and ash flowing from the volcano.

How to See An Alaska Volcano

Most volcanoes in Alaska are in the Aleutian Arc and the surrounding waters, so take a trip out on the water to catch a glimpse of these smoldering mountains. There are specialized volcano tours if you have a destination in mind. A trip on the Alaska Marine Highway ferry system or other nautical options is a great way to see the state and see volcanoes in Alaska.

Check out Volcano Tours By Smokey Bay Air for an incredible way of viewing a few of these volcanoes. 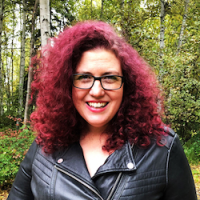 Carey Seward has written about culture and travel the "Jeju Weekly" (South Korea) and for the national blog "Only in your State - Alaska." She is also a teaching theatre artist, musician and comedienne who writes, directs, performs, and produces stories for stage, screen and on the page.